After a pleasant sail up the southern coast of Nova Scotia, through the Canso Strait and into Northumberland Strait I arrived in Charlottetown PEI on 9 May.

Drying out in Liverpool Nova Scotia

The sail went well except for the last leg. I enjoyed SE winds 15 to 20 knots to Chedubucto Bay where the winds back to the south. After spending a night on Eddy point wharf I carried on my way up the strait passing through the causeway swinging bridge and associated locks. 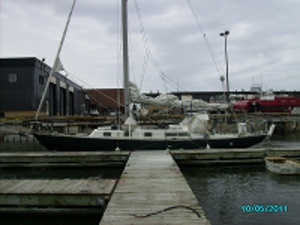 The winds backed to SW and later in the early hours to E. It then went calm for a spell and as i was rounding the south shore of PEI coming up to Point Prime a god awful northerly kicked in and it was a hard slog up Hillsboro Bay in Charlottetown harbour. A mixture of reefed down sails, tacking, and motor sailing did the trick.

Charlottetown yacht Club haven’t finished putting in all their docks yet but I’ve managed to find a temporary berth.

Now it’s a matter of sourcing masts and getting them built of shipped here.

Will report back when I have some progress in that regard.